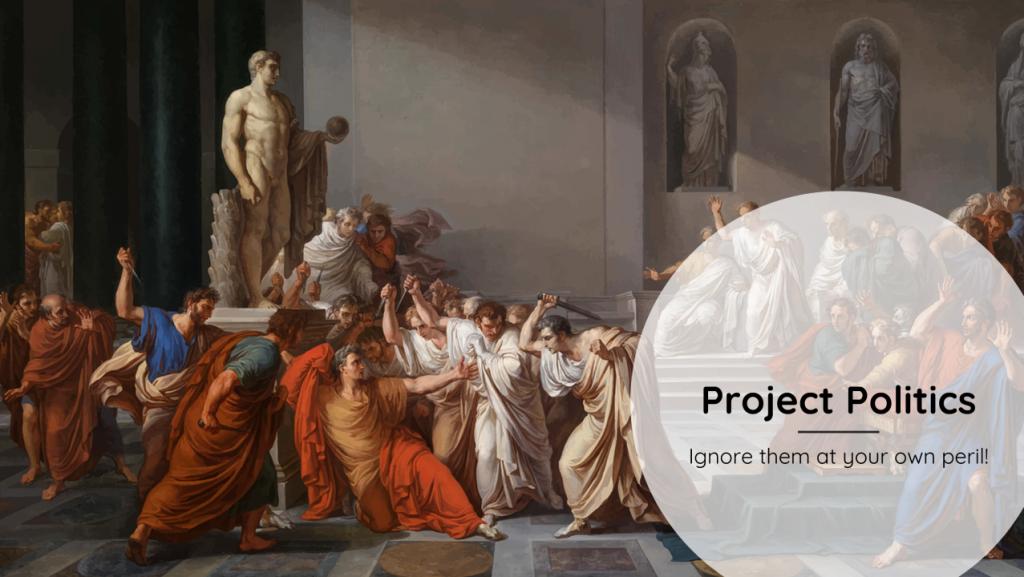 No project is politics-free.

Most projects run within organisations, so they inherit existing politics (organizational and office politics) and often become a natural arena of political activities. Moreover, as a new endeavour with achievements to be acknowledged and potential failure to be managed, projects also create their own politics.

Project politics are often seen as a risk which needs to be acknowledged and managed. If managed properly, however, politics can also be used as an important management enabler.

To do this, one needs to be familiar with the context of a project: the problem that is to be tackled, the meetings that took place, the negotiations, debates and decisions, the rejected ideas, the relationships between the stakeholders, and all the background dynamics that resulted in its current state.

Politics exist as part of the organisational landscape, or they can emerge as projects come into existence and can be shaped by how the projects are managed. Organisational and office politics are continuous and often transcend projects, teams, units, etc. They can therefore influence projects in non-obvious ways as causes and effects of politics interplay between past, present and future.

Politics are an expression of the defence of territories of influence, as well as the pursuit of personal and/or professional goals and interests by permanent structures within the organisation, groups or individuals. They can be aligned with the broader interests and goals of the organisation, or they can be a result of unproductive and selfish hidden agendas.

Politics are always there

even when they are not explicitly expressed or visible.

Politics are highly dynamic and can easily change depending on external factors or the phase and state of the project. They can remain dormant while the project landscape remains unclear or fluid but can then appear out of nowhere during a “rough patch” when things start to go less well, or even when things start going unexpectedly well and people start fighting over the ownership and visibility of success.

Some stakeholders will only offer their support to the project once they have negotiated and secured returns for their domain of influence now or in the future. Such returns commonly relate to an increase in power/influence, budget control, visibility, career advancement, etc. They can be aligned with organisational goals or can be purely their own personal/professional goals (though often well masked) which may even be misaligned with organisational goals.

Read the second part of this post: Guidelines for Managing Project Politics

There are many types of politics originating from many different sources. Politics can be:

Unproductive management of project politics happens when politics are not managed, that is, managers under-invest in identifying and managing politics, or at the opposite extreme, when project management is driven by politics, in which case there is an over-investment in creating/managing politics and excessive dependence on favourable politics.

Some observable consequences of the ineffective management of politics are summarised below:

In the context of project management, politics need to be managed in a way that either enhances or (at least) minimises their negative impact on the project’s goals.

Read the second part of this post on Guidelines for Managing Project Politics.

Your Source of PM² Knowledge