Project Governance and the ARSCI Model

Project governance is one of the pillars of good project management and a Critical Success Factor (CSF) for all projects, particularly for complex projects which involve multiple organisations, with different procedures and culture – which often pursue and defend their own interests and perspectives.

Project governance is the framework within which project management decisions are made. It defines all standard project roles and their associated responsibilities while describing escalation and reporting lines.

A project organization presents the connections and relations between the various Roles defined in the project (see figure below). Roles are essentially defined by the management responsibilities given to them. Responsibilities describe what each Role needs to be concerned with, their domain of work and level authority.

A good governance model provides a structured and effective framework that is logical, robust and flexible enough to facilitate the governance of a wide range of project types and size. 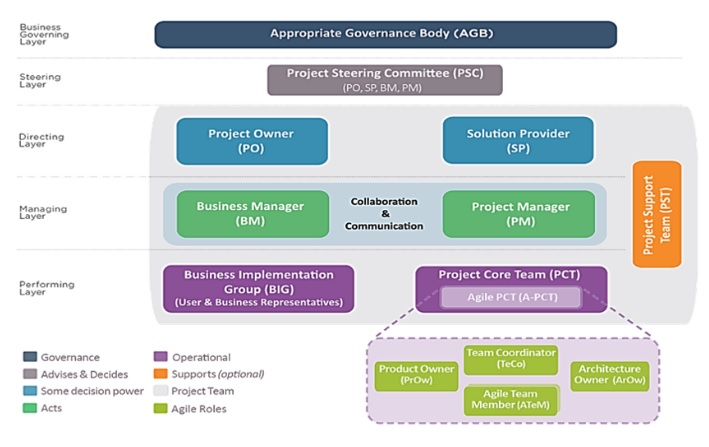 Generally, project management Roles should be assumed by (or assigned to) the right people and for the benefit of the project, while the identification and distribution of responsibilities should be clear and done in a way that minimises any conflicts in perspective or interest that may arise from them.

Project Management responsibilities are both a right and an obligation.

Best practices say that each Role should be (ideally) assigned to a different person. Unfortunately, scarcely ever do we come across ideal situations. In those cases, Roles should be perceived as different ‘hats’, where a single person can be switching between multiple Roles (like hats), although, one should avoid wearing more that one hat at the same time, as there are often conflicts in perspectives and priorities that may cloud their judgment.

The ARSCI Model for Assigning Responsibilities 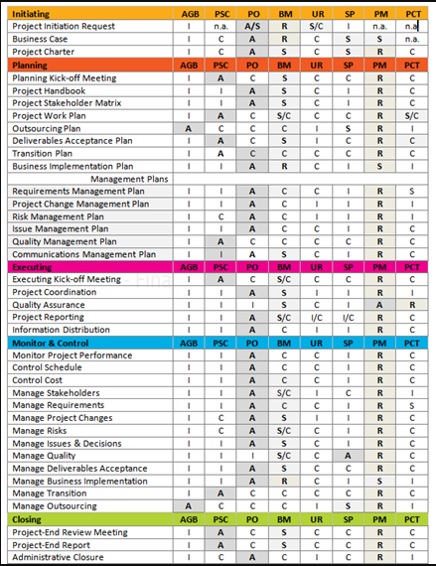 1) The Role that is Accountable (ARSCI:A) is ultimately answerable for the success or failure of what they are accountable for. The Accountable person/group/entity is ultimately answerable for the correct and full completion of the deliverable or task – they accept the quality of the deliverable or task. They also need to provide the resources, leadership and support for everyone else to perform their own responsibilities. There should always be a single Role Accountable for any given management activity or artefact.

2) The Role that is Responsible (ARSCI:R) is responsible for doing the work (e.g. creation of an artefact). Often, others may also be assigned to do work, for instance, when they have the Support responsibility, or when work is delegated to them. However, it should be clear that only the work part can be fully delegated and not the responsibility itself, as in those cases, the delegator becomes accountable for the performance of the delegee. Note that just like with Accountability, there should always be a single role Responsible for any given management activity or artefact.

When responsibility is delegated, the delegator becomes accountable for the performance of the delegee

As part of a team, Roles with the Supports (ARSCI:S) responsibility also work with the person Responsible to complete the given management activity or artefact. There is no restriction to how many people can be ARSCI:S.

As part of a team, Roles with the Consulted (ARSCI:C) responsibility need to provide information or insights to the person Responsible so that they can complete a given management activity or artefact. The Consulted responsibility is not simply a right, but it is also an obligation. There is no restriction to how many people can be ARSCI:C.

Finally, those Roles with the Informed (ARSCI:I) responsibility need to be kept informed of the progress or/and the end result of the activity or artefact. Just like above, the Informed responsibility is not simply a right, but it is also an obligation to remain informed. There is no restriction to how many people can be ARSCI:I.

Responsibilities: both a right and an obligation

Compliance is good, commitment is better

Finally, it’s useful to acknowledge that sometimes in the process of defending the priorities of each Role, conflicts may arise within the project organisation. To manage these conflicts, it is necessary that all Roles establish a productive relationship based on a shared project vision, on a clear assignment of responsibilities and accountabilities, on clear communication and collaboration rules as well as on shared values and mindsets.

About the PM² Alliance

The PM²Alliance is an international, not-for-profit organisation founded by PM² practitioners. It brings together individuals from institutions, companies and academia to inspire dialogue, share resources, and address the field’s challenges while promoting the wider adoption of the PM² Methodology for the advancement of Project Management Europe and for the public benefit.

The PM² Alliance plays a crucial role in enabling the sharing of knowledge and experiences and fostering an appreciation of PM² as a common, open and free methodology for Europe – and beyond. Through its network of affiliated corporate and individual members, it makes possible to conduct European wide communication and dissemination activities and events. 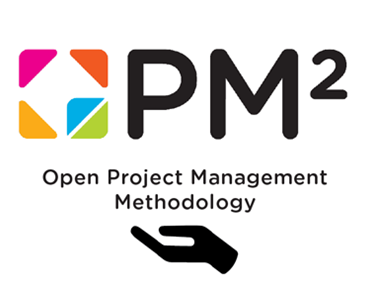 About the PM² Methodology

PM² is a Project Management Methodology developed and supported by the European Commission. Its purpose is to enable project teams to manage their projects effectively and deliver solutions and benefits to their organisations, partners and stakeholders.

PM² is lean and easy-to-use, but also it is open-source and free; It incorporates elements from a wide range of globally accepted project management and agile best practices, standards and methodologies and captures the experience the EU has gained from managing thousands of projects, organisational change initiatives, EU Programmes and Grants.